The town of Loches is connected to some of the great celebrities of French history: Agnès Sorel, "Lady of Beauty" and the first officially recognised mistress of a French king, Fulk III, fearsome warrior and indefatigable builder who commissioned the Donjon (castle's keep), and Ludovic Sforza, patron of Leonardo da Vinci, who was imprisoned in the dungeons of Loches. 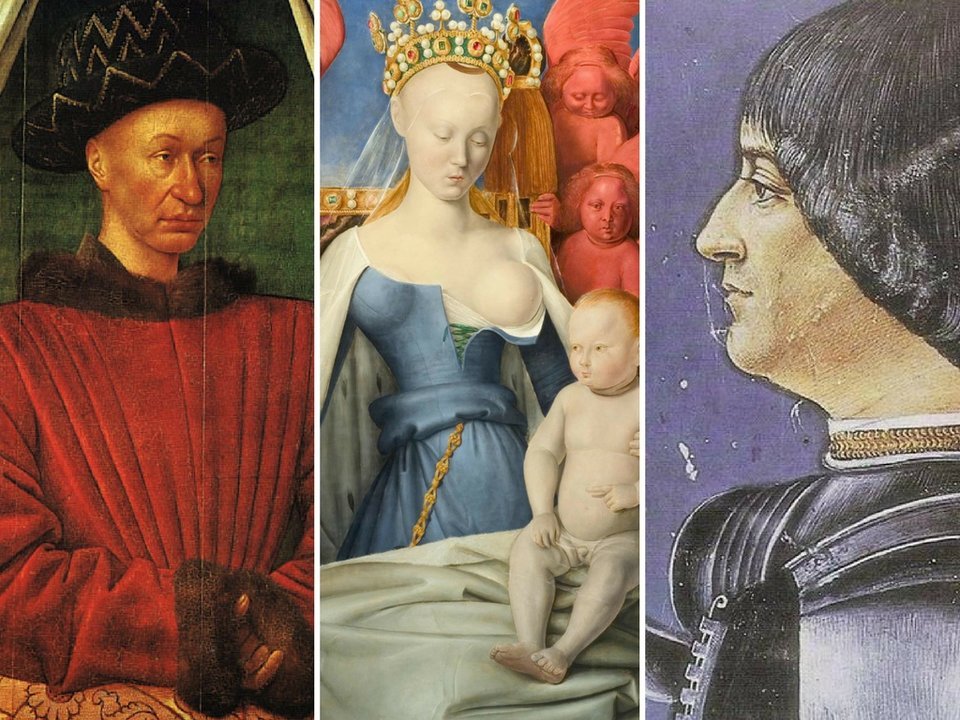 Agnes Sorel, Charles VII's favourite mistress, came to brighten up history with her radiant grace and beauty, which had made her famous throughout the kingdom. It was in the royal lodgings of Loches, in the Touraine, that the beautiful Agnes and her king embarked on a fairytale love story.

Catching sight of her among Isabelle de Lorraine's maids-of-honour, the king fell head over heels in love with her, to the point that he officially recognised her as his favourite, giving her a status no king's mistress had ever held before.

Agnes exerted a strong influence on the king and gave him good advice. With her sharp wit and intelligence, she was able to surround herself with important people such as the the merchant and financier Jaques Coeur, who provided her with precious finery. With her sumptuous dresses and lavish lifestyle, Agnes revelled in her new life.

Provoctive and extravagant, she started the fashion of decolleté off-the-shoulder dresses displaying ample cleavage; a portrait of her by painter Jean Fouquet even shows her with one of her breasts exposed.

However, she had enemies who wanted to get her away from the king and continually plotted against her, until one day, at the age of 28, she disappeared in mysterious circumstances.

According to scientific analyses made in 2005, the Lady of Beauty was, in fact, poisoned with mercury. She lies buried in the Collegiate Chruch of Saint Ours in Loches, where two angels watch over her eternal slumber.

Donjon de Loches (Keep), a giant of a building

The keep of Loches castle is one of the most impressive examples of all the constructions built by a man who was once known as the "Black Falcon".  Fulk III, or Foulques Nerra, was not just a fearsome warrior: he was also a prodigious builder, whose many achievements can be seen scattered around the Touraine, Anjou and Poitou.

Fulk III, Count of Anjou, was notorious for his cruelty and bloodthirstiness. He spent a considerable part of his life fighting his enemies, particularly Odo II, Count of Blois, his nemesis. He imposed his authority through force of arms.

His virulence in battle was equalled only by his passion for building. Hundreds of castles, keeps and abbeys sprouted up under his command (Montrésor, Langeais, Montbazon, Montrichard, etc.). The Donjon de Loches (castle keep) is one of his most impressive constructions. 36m tall, with 3m-thick walls along the base, this imposing building was erected between 1013 and 1035. It's one of the most well-preserved examples of its kind in Europe.

As well as being a fearsome warrior, Fulk III was a very devout man. He made the pilgrimage to Jerusalem several times. He made a great number of donations to atone for his sins and the fever of his warrior days; he founded priories, churches and abbeys in Touraine(Beaulieu-lès-Loches, Chartreuse du Liget ) and in Anjou (Saint-Nicolas Church and Ronceray Abbey in Angers, for example).

Locked up in the donjon de Loches (castle keep)

It was in Loches that the great philanthropist Ludovic Sforza, Duke of Milan and rival to King Louis XII, spent his last days. He died in 1508, a few days after being released from his cage in the dungeon of Loches castle, where he'd been imprisoned for four years.

His passion for the arts enabled him to help a number of important people, most notably Leonardo da Vinci, by inviting them to the ducal court. He was an active philanthropist who transformed Milan into a briliant and much-envied court. Ludovic Sforza was the man responsible for the Italian Wars. His love of intrigue brought him to draw the king of France, Charles VII into the conquest of the kingdom of Naples, and he ended up helping the French invade his own duchy.

Upon the death of Charles VIII, Louis XII took up the Italian Wars, intending to set himself up as ruler of Milan, as the only legitimate heir through his grandmother, Valentina Visconti. Ludovic Sforza was taken prisoner by the French in Novaraon 10th April 1500. Captive in France, he was to die in the Donjon de Loches (castle keep) in 1508 after four long years of imprisonment.

His cell still bears the marks of his passage. Even today, you can see the many paintings and etchings he left on the walls.